When Ashlley and her fiancé arrived to the refuge, they fell in love with a silver cat with a black face. The kitty’s voice had an unusual tone to it. 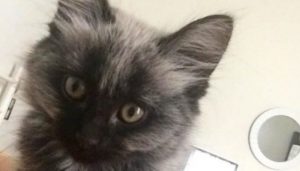 ‘He appeared more like a fledgling wolf than a little cat, but he was really affectionate, and when we got him home from the shelter, he nestled contentedly beneath my fiancé’s pullover,’ Ashlley writes. 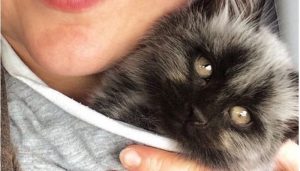 ‘He wanted to remain there and walk around the house with me right away,’ the woman added. ‘It was tough to say goodbye to him when I needed to go to work, but when I returned, he greeted me eagerly and searched me.’ 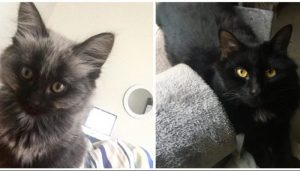 As he grew older, the kitty’s silver hair lingered less on his skin. After two or three months, he was left with only a few silver hairs. Several sites developed a dense black velvet fur coat. 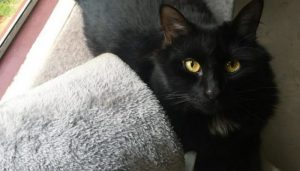 As a result, the kitten grew into a regal black feline with a little white spot on his breast. As an adult, he too longed to sit on Ashlley’s shoulder. He also liked napping on Ashlley’s bed, near to her head. The kitten had reached its full potential.