We’re big fans of heartwarming animal rescue stories. This lucky cat not only made it through, but also got a new mother in the form of a dog.

Brittany Callan, an American lady, was helping a family repair a property in August.
She became aware of a faint squeak coming from the garden and proceeded to investigate. She saw a little blind kitten there, but its mother was nowhere to be seen. Brittany didn’t touch the kitten since she expected it to return shortly. 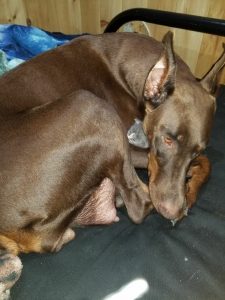 However, because the baby’s crying could be heard until the evening, Brittany had no choice but to take it home. The woman was apprehensive since she had a dog and was unsure how it would respond. 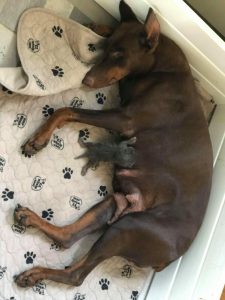 Some people believe Dobermans are vicious dogs, but Ruby shows them all wrong. She had recently given birth and was excited to adopt another kid.

Ruby’s pups couldn’t tell the difference between siblings and a newborn kitten. 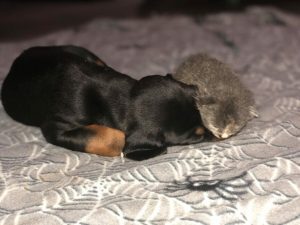 The dog has previously cared for orphaned infants of other species, such as rabbits and guinea pigs, so there was no need to be concerned about the unexpected baby’s fate. 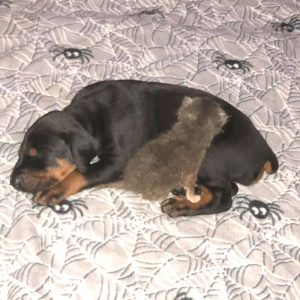 Rose, the kitten’s name, enjoys spending time with her canine companions. She began playing with the pups (with Ruby’s supervision) when she grew older. This touching anecdote demonstrates how caring animals can be (even if they are considered to be dangerous and even violent).